The Northern Lights also called the Aurora Borealis, is a magical phenomenon and nature's most spectacular light show. People come from all corners of the world traveling to Lofoten to experience this light phenomenon. But what makes Lofoten one of the world's best and most exciting destinations for experiencing the Northern Lights?

Lofoten is located in the middle of the Northern Lights Oval

Lofoten consists of several smaller and larger islands that stretch from Norway’s mainland into the Norwegian Sea. The archipelago is located in the middle of the center of the Northern Lights Oval, is where the Northern Lights appear in the zenith when it is at a medium to maximum activity. Low northern lights activity usually stays north of the archipelago, but is visible as long as there is clear weather in the direction it occurs.

The strength of the Northern Lights is stated with a Kp-index. It mainly tells where in the sky the northern lights are expected to appear. Kp 0 will be completely out on the horizon seen from Lofoten, Kp 4 will be straight up in the zenith, while Kp 9 (occurs very rarely) means that it will appear far to the south, sometimes as far south as Southern Europe. There is a connection between the amount of Northern Lights and how far south it is pushed, it is not necessary that there will always be a wild dance in the sky even if the Northern Lights have a Kp 5. Likewise, you can get a fantastic northern lights dance towards the north with a Kp 2 forecast.

The combination of islands with high mountains that extend up to 1000 meters above sea level means that the weather conditions can be very local. We can, therefore, experience several types of weather, and even if it is cloudy in the southern part of Lofoten, it may be clear weather to the north, east, or west. In many cases, you will be able to see the Northern Lights from more or less every corner around the archipelago. The short distances in Lofoten allow you to move with the northern lights activity and get from the northern parts to the south of the islands in a very short time.

Although Lofoten is located at 68 degrees north, we have a mild coastal climate throughout the autumn and winter due to the passage of the Gulf Stream. The average temperature in autumn (September - November) is approx. 6+ degrees and in winter (December - March) approx. 0 degrees.

The Lofoten islands are known for its wild and dramatic landscape consisting of both lowlands and steep mountain ranges, surrounded by a spectacular coast with several chalk-white sandy beaches. Lofoten's unique landscape in combination with detached houses and fishing villages along the coast makes Lofoten a paradise for Northern Lights photographers. The motifs you can create in combination with the Northern Lights are also something that makes Lofoten the best Northern Lights destination in the world. 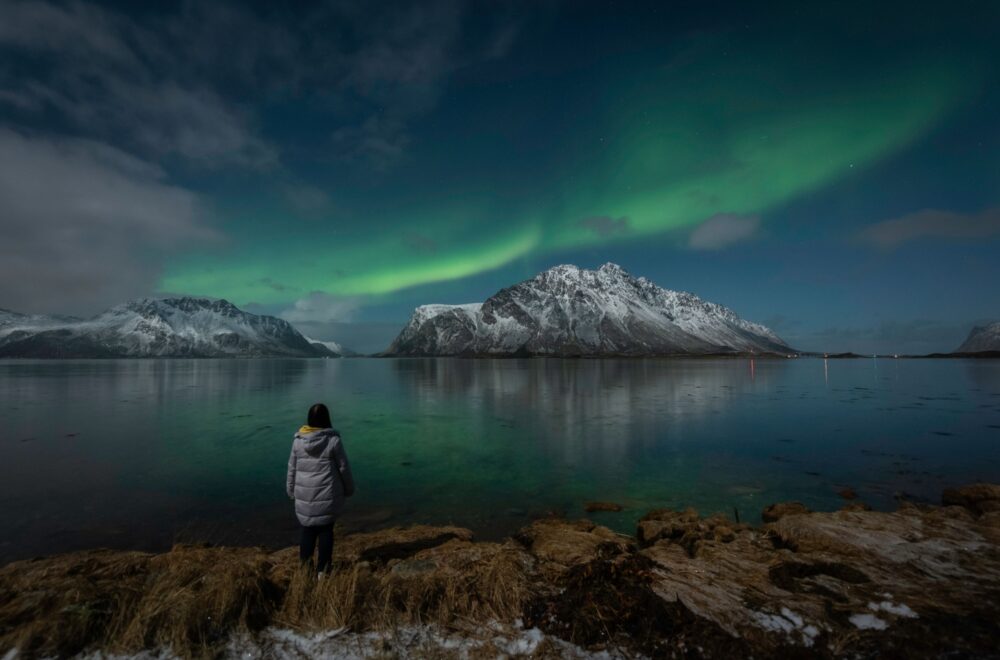 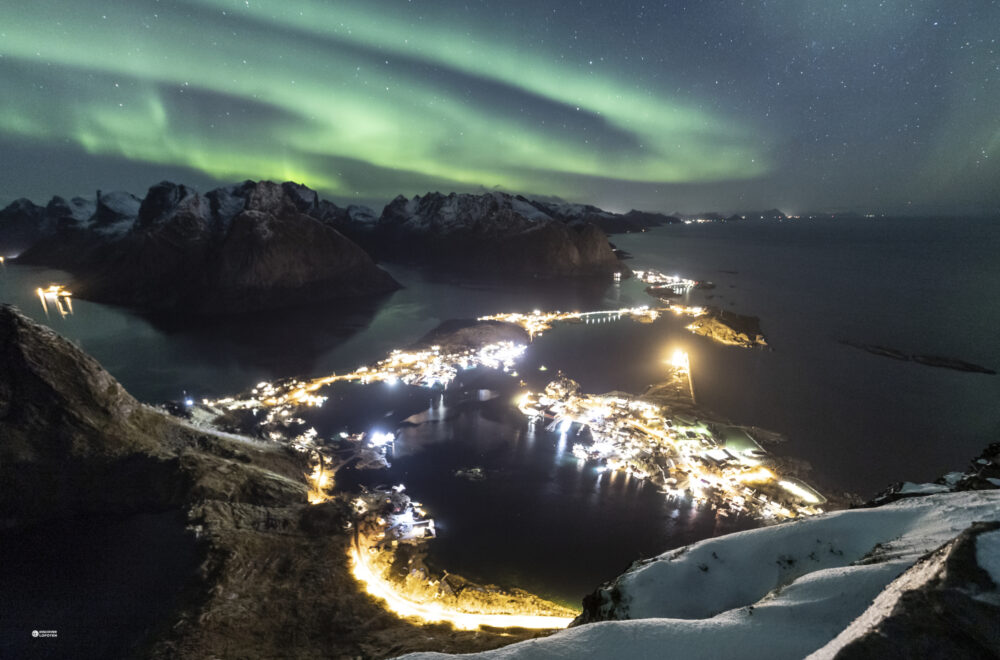 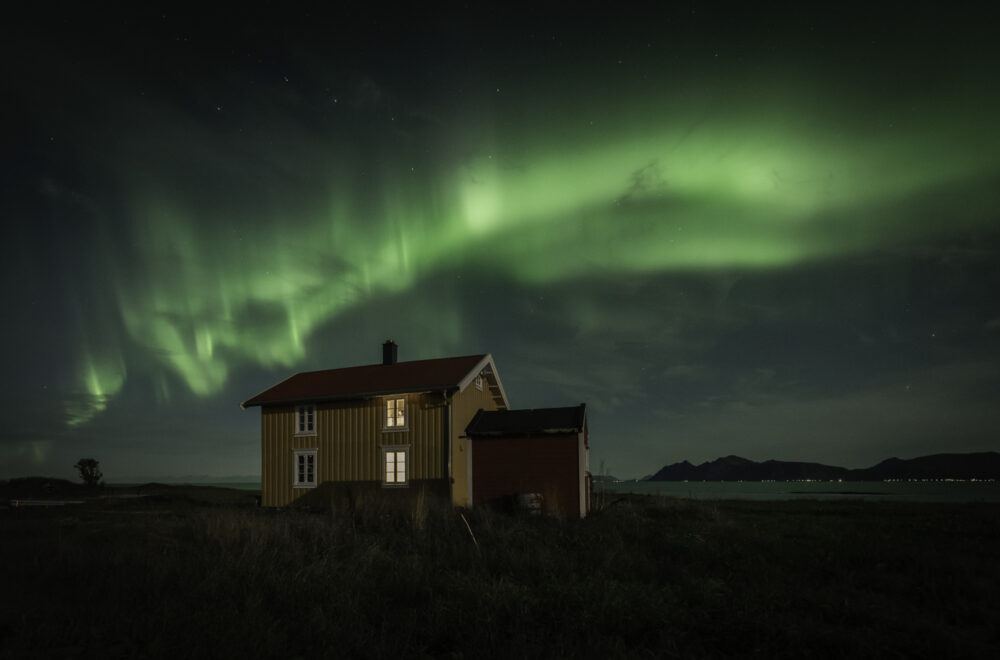 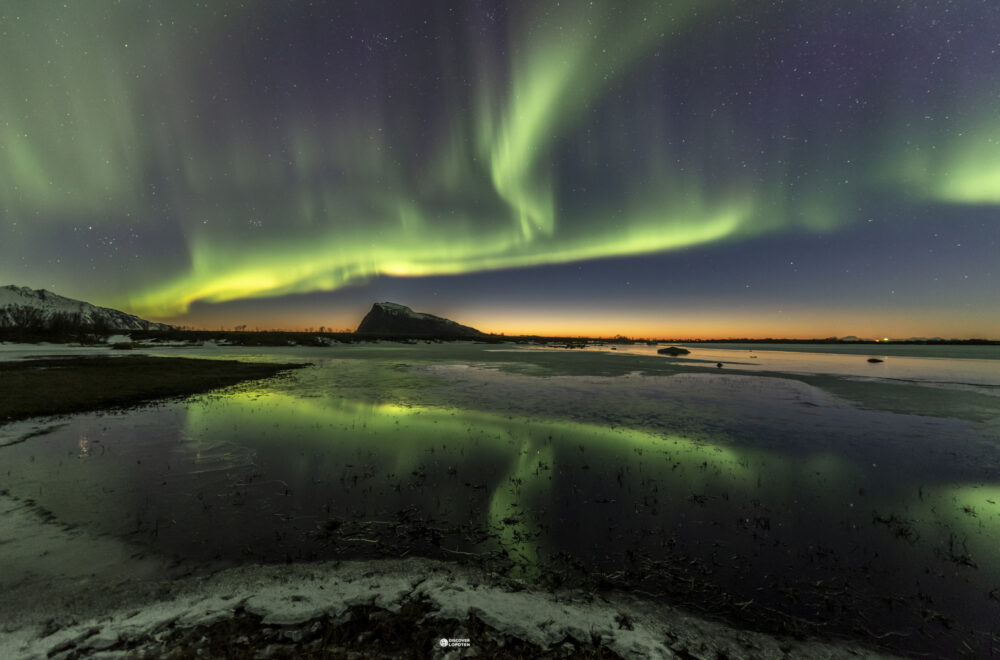 Fact: How the northern lights occur

The Northern Lights occur after blowouts of electrical particles from solar explosions. When these come in the direction of the earth and are brought down towards the poles where the earth's magnetic fields are the strongest, energy is released and northern lights are created. It takes up to 2 to 4 days before the electrical particles from a solar explosion collide with the Earth's atmosphere until we see increased activity. How fast it reaches us depends on the size and speed of the solar storm.

Experience the northern lights with Svinøya Rorbuer as your base

Svinøya Rorbuer is located on an island in the town of Svolvær. Svinøya is connected to the town by a bridge and is still today a lively little fishing village where you can spend the night in fisherman's cabins. On Svinøya there are many beautiful photo motifs, which can be combined with the northern lights if you are lucky. It is the perfect location to take a picture of Svolvær with the sea, mountains, and the northern lights above when conditions allow it.

If you cannot see the Northern Lights from Svinøya, you can reach other good locations in just 30-60 minutes. It’s only 2,5 hours to Reine and approximately 2 hours to the mainland by car.

We have rorbu cabins in different sizes, that fits for 1 to 8 persons.